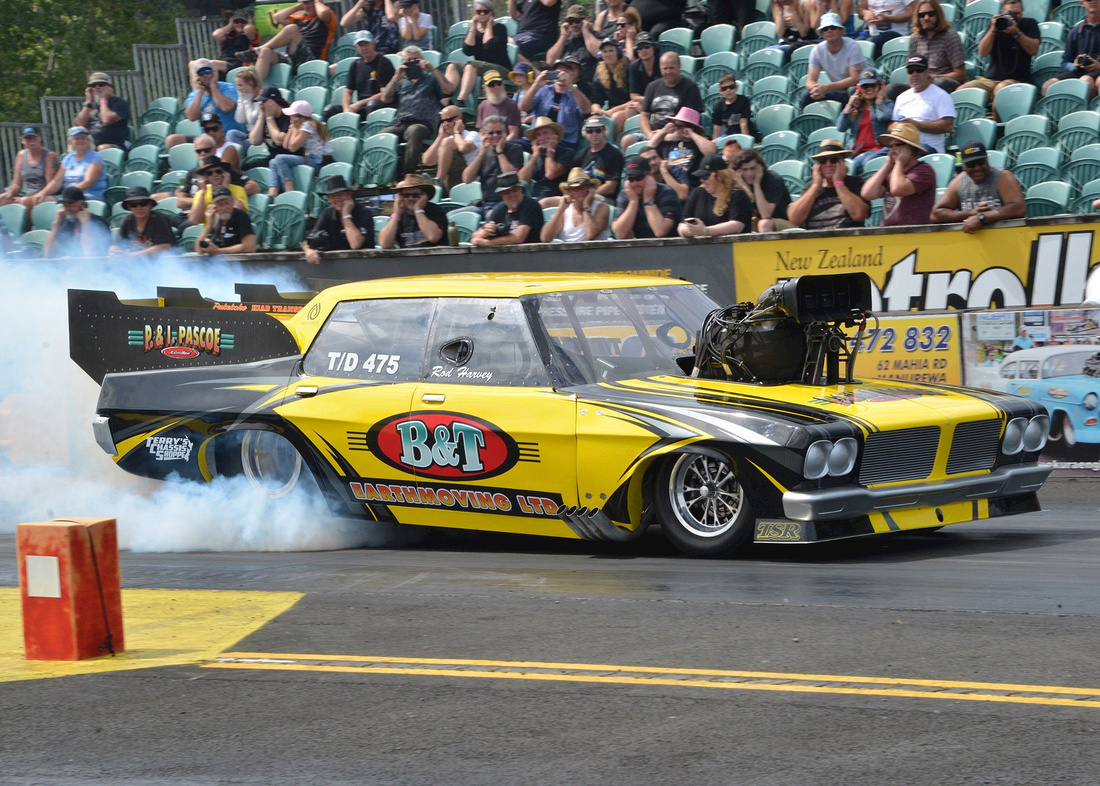 Trevor Smith’s 75 Holden Statesman won the IHRA Nationals Top Doorslammer title at Meremere in March with Rod Harvey at the wheel.
Beachlands drag racer Trevor Smith has re-powered his 365km/h family heirloom in the quest for another performance step, and to fulfil his long-held ambition of racing at Australia’s Winternationals.

Smith has shipped his 75 Holden Statesman — the winning Top Doorslammer at the IHRA New Zealand Nationals back in March — to Brisbane for next month’s Winternationals, but in an upgraded specification that has never seen the track in New Zealand.

The big Holden has been re-powered, with its big block Chevrolet engine replaced by the supercharged Chrysler Hemi from the Lodge family Top Alcohol dragster. Smith will benefit from the knowledge of Australian drag racing stalwarts Victor and Ben Bray in the lead-up to the 51st annual Winternationals at Willowbank Raceway near Ipswich on June 7-10.

“We got to know Victor and Ben Bray a few years ago through Rod Harvey,” said Smith.

“They have offered several times over the years to help us if we wanted to race in Australia.

“I’ve shied away from it until now but this time the offer was too good to refuse.

“So the day after winning the Nationals, the Chev came out of the car and we started work on fitting the Hemi. The car is over at Team Bray Racing now getting set up to run in Pro Slammer.”

The switch to Hemi power is the latest step in the ongoing development of the big Holden that, to date, has achieved a best quarter-mile pass of 6.261secs at Meremere Dragway.

“It started life as my father’s daily driver and it became my race car and we’ve developed it ever since. My son [Trevor Junior] will get to race the car soon, so it will have three generations in the family. The goal is one day to race Doorslammers side-by-side against my son.”

Smith missed most of the 2017-18 local season while recovering from shoulder surgery. He called on Rod Harvey to take over driving duties and the pairing clinched the IHRA New Zealand Nationals victory at Meremere.

“We’ve got a great group of sponsors with P&I Pascoe Transport and B&T Earthmovers so, rather than miss last season, we ran the car with Rod driving and won the Nationals.”

Winning isn’t part of the plan for the Australian campaign.

“It’s a big experiment and an experience for us,” said Smith.

“They run into the 5.60s over there. Our goal is to get the car sorted with the Hemi in it, using the help and knowledge of the Bray team, and be ready for when the season starts here next summer.

“I’ve been to watch the Winternationals a few times and to race there has been on my bucket list for a long time.”

The Winternationals is the final round of Australia’s 400 Thunder national series. With 500 entries, it’s considered the largest and most prestigious drag racing event outside of the US.

Smith’s entry makes it a quartet of Kiwi racers set for this year’s Winternationals.

Rod Harvey is a regular on the Australian scene in his Yuasa Batteries Toyota Celica Factory Xtreme contender and his daughter Shavaun has been racing at recent Australian events in the Junior Dragster category.

Pukekohe’s Lee Sherwin has based his V8-powered Mk 1 Ford Escort in Brisbane for the past two years, commuting across to compete, and was the runner-up in the Super Sedan division in last year’s Queensland series.

Lacey Will(non-registered)
Express and PC organizing everything out is making an epic store of things less hard for individuals and illuminating stacks of individuals. I wander that how individuals had the choice to illuminate their most goliath issues without PC's assistance with the past period.
http://www.peakprosperity.com/user/wyatt32/
http://forums.saltwaterfish.com/members/zayan2.321143/#about
http://substack.com/profile/48029544-fill-smith
http://social.msdn.microsoft.com/Profile/FillSmith
http://uid.me/cristopher_morgan#

Ole Weber(non-registered)
Bullying is possibly the most super upsetting issue that might get a rich far from school. Students can visit http://www.grammerchecker.net/our-british-english-grammar-checker/ to get online help in work. ​I have finally found in different such cases that youngsters feared coming to class due to bullying.
Fred31(non-registered)
Excusing how I am using the latest mix of the Microsoft Office yet in the meantime I need the 2003 change since I need to complete a particular disturbing new turn of events. You can visit http://www.paragraphchecker.com/english-paragraph-correction-online/ for more details. I have gotten the focal blend because of you.
Fred31(non-registered)
Possibly than being proposing and following credits, we are doing the opposite. One hire this http://www.paragraphcorrector.com/improve-persuasive-writing-skills-with-paragraph-changer-online/ to do work at time. We are seeing a titanic store of issues on a rule level pondering not happening to proposing credits.
Greg22(non-registered)
Truly saying, I am astoundingly harmed to graph that report about the Church. I often visit http://www.spellingcheck.info/professional-online-spell-check-service/ to check my mistakes during work. Being a striking individual, this is a ton for me to drive forward.
No comments posted.
Loading...
Subscribe
RSS
Recent Posts
Caruso Family Racing Are Headed To The World Series Of Pro Mod! AUS RECORD HOLDER TO DEBUT NEW CAR AT JAMBOREE SADEK STEPS UP IN THE GODFATHER’S CHARIOT WINTERNATS WIN FOR TEAM BRAY RACING RAPISARDA AUTOSPORT INTERNATIONAL PART OF HISTORY First female Top Fuel champion crowned at Winternationals for LTFR TBR READY FOR WINTER WONDER Volunteer manpower behind the horsepower GOUWS FAMILY LOOKS TO MAKE IT 2 FROM 2. Rod’s racing turbo charged by power duo sponsorship
Keywords
andra willowbank sydney doorslammer winternationals top top fuel perth fuel racing
Archive
January February March April May June July August September October November December
© 2018 Dragphotos.com.au - All Images remain property of Dragphotos.com.au
Powered by ZENFOLIO User Agreement
Cancel
Continue