Rod Harvey may drive a Toyota Celica but there is nothing pedestrian about this sports compact drag car: it is, in fact, the fastest import car in the southern hemisphere and the fifth quickest in the world.

The Kiwi driver, who holds more than 20 tracks records, national records and event wins across Australia and New Zealand, splits his time between his homeland and Kallangur, Brisbane to compete in the Australian racing circuit season.

Rod’s best race to date was at last year’s Willowbank Raceway Winternationals where he reached 253.1 miles per hour. In June he will again take to Willowbank for the Winternationals and is stopping in at Battery World Ipswich on Tuesday (June 5) at 10.30am with his car to meet with fans who can get up and close to the car.

In 2017, his car was the first ever Factory Extreme/Sport Compact car to run a five-second pass in Australasia at the Gulf Western Oil Winter Nationals and the third fastest in the world for mile per hour at 253 mph. 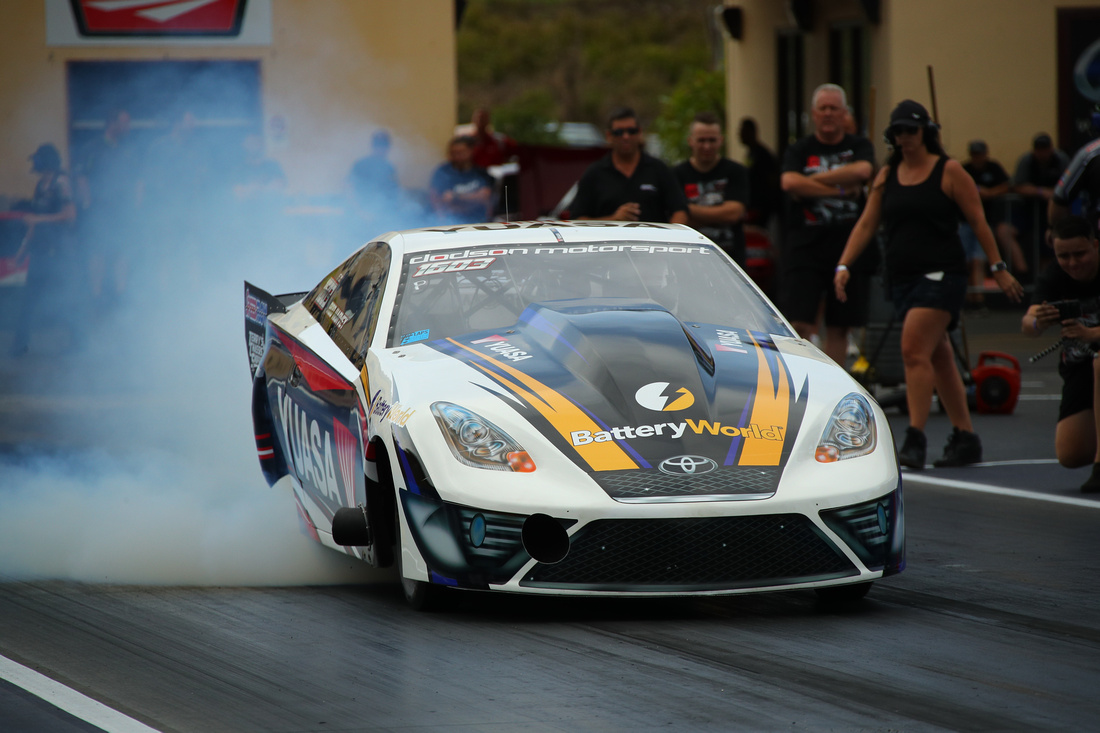 It is nothing for this driver to reach speeds as fast, and faster than some competition door slammers: full-bodied racing sedans with V8 supercharged engines fuelled by methanol.

“To qualify for door slammer, at the last Winternationals you needed to reach a 5.90: that’s covering a quarter of a mile in 5.9 seconds, or faster,” Rod says. “What makes me passionate about this machine is we have been able to do that and faster. So, to be able to get this much power out of this engine is something pretty special. They say you’ve got to drive these cars like you just stole it.”

Rod and his small team are hitting the 51st Gulf Western Oil Winternationals this year thanks to a joint sponsorship by Battery World Australia and Century Yuasa.

“Sponsorship is critical in racing,” he said. “The duo of Battery World and Century Yuasa is a great fit for us and it is great to support an Australian-made manufacturer. There is a standard joke on how you make a million dollars in racing – you start with 10 because it quickly whittles down. I was always attracted to racing cars from motorbikes and streetcars: racing V8s until 2000, when I switched to sport compact, but I also have a trade. My dad made sure I would have something to fall back on if racing didn’t pan out.” 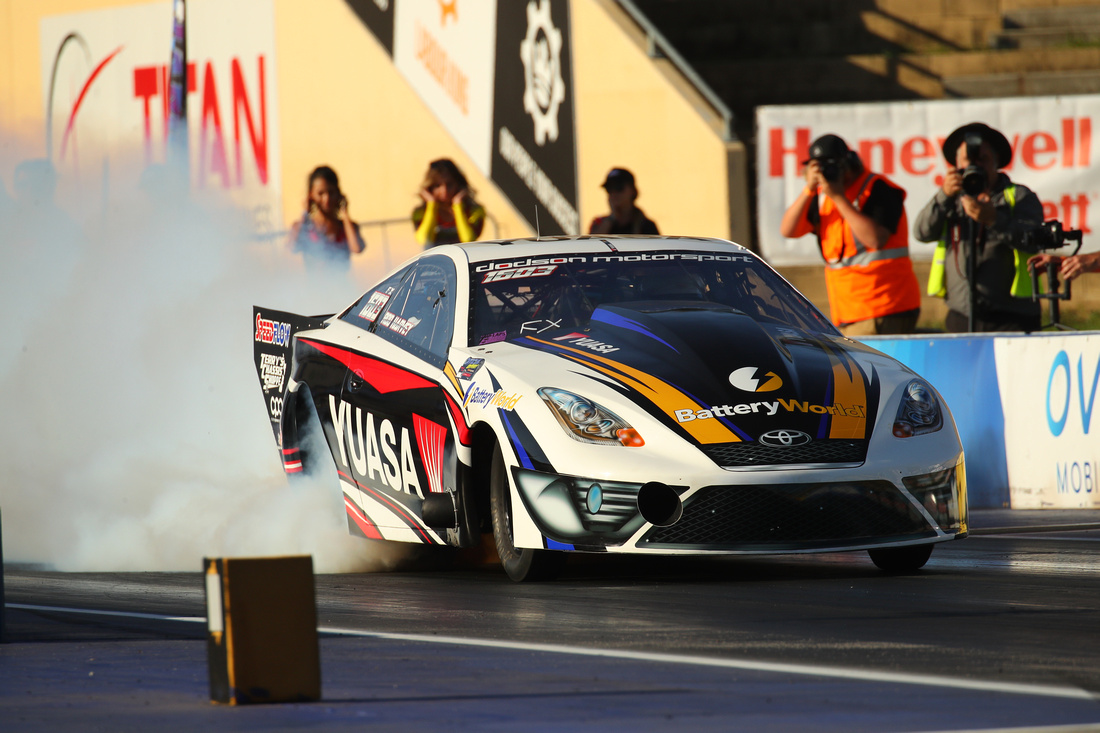 While hitting speeds of over 407km per hour is all in a day’s work for the 46-year-old builder his 10-year-old daughter Shavaun, who races alongside him in the junior categories, and is also sponsored by Century Yuasa, is only allowed to reach speeds of 100km or 11.9 over an eighth of a mile.

“Shavaun says she can’t wait until she can race as fast as me,” Rod says. “And her younger brother Carlos, 6, also can’t wait for the day when he can get his junior dragster. It’s definitely a family affair with my wife Natalie down on the track with us. She is the one talking to us through our headsets keeping us calm and she is also our chief ‘strapper-inner’: she won’t let either of us drive unless she has made sure the seatbelts are safe and secure and only she can do it. She is also in the tow vehicle that brings the cars back in.”

To keep up to date with all of the latest news from Rod Harvey, visit https://www.facebook.com/rodharveyracing

Orin Kuhlman(non-registered)
Nowadays, there are tremendous such individuals who are understanding the need of custom toys. Visit http://www.copychecker.net/essay-similarity-checker/ to get solution of your mistakes. They're directly as time goes on understanding that the stuffed toys can be utilized for ultimat purposes other than.
Rohan28(non-registered)
I'm happy to perceive how you have joined that Aughton's most indisputably evil parker. You can visit http://www.sentencestructure.org/will-online-structure-sentence-helper-make-your-writing-better/ for making your work excellent. The person who is behind this ought to be embarrassed for what he has done.
Rohan28(non-registered)
I'm other than considering purchasing another private house in the Ormskirk Prime Site. Just have a look http://www.freepunctuationchecker.com/professional-verb-checker-online/ i hope you will like it. Being a surrendered unequivocal, this is offering a ton for me to cover.
Rohan28(non-registered)
By obstacle of the Parapa Setup, my adolescents are getting a charge out of regularly captivating time. On the off chance that you are looking through this kind of source​. Click http://www.grammarcheckeronline.org/professional-grammar-checker-online-free/ to get more ideas. There are central degree of restored youth's shows present in this device.
Rohan28(non-registered)
Absolutely astonishing family-obliging activities were made during the Easter eve. I had shaped on Easter eve yet I had abundance fixes paper. Visit http://www.sentencecorrection.biz/best-known-sentence-comma-checker-online/ for more ideas. I investigated number of these countries to get some epic encounters.
No comments posted.
Loading...
Subscribe
RSS
Recent Posts
Caruso Family Racing Are Headed To The World Series Of Pro Mod! AUS RECORD HOLDER TO DEBUT NEW CAR AT JAMBOREE SADEK STEPS UP IN THE GODFATHER’S CHARIOT WINTERNATS WIN FOR TEAM BRAY RACING RAPISARDA AUTOSPORT INTERNATIONAL PART OF HISTORY First female Top Fuel champion crowned at Winternationals for LTFR TBR READY FOR WINTER WONDER Volunteer manpower behind the horsepower GOUWS FAMILY LOOKS TO MAKE IT 2 FROM 2. Rod’s racing turbo charged by power duo sponsorship
Keywords
andra willowbank sydney doorslammer winternationals top top fuel perth fuel racing
Archive
January February March April May June July August September October November December
© 2018 Dragphotos.com.au - All Images remain property of Dragphotos.com.au
Powered by ZENFOLIO User Agreement
Cancel
Continue