Volunteer manpower behind the horsepower

Volunteer manpower behind the horsepower for Winternationals. 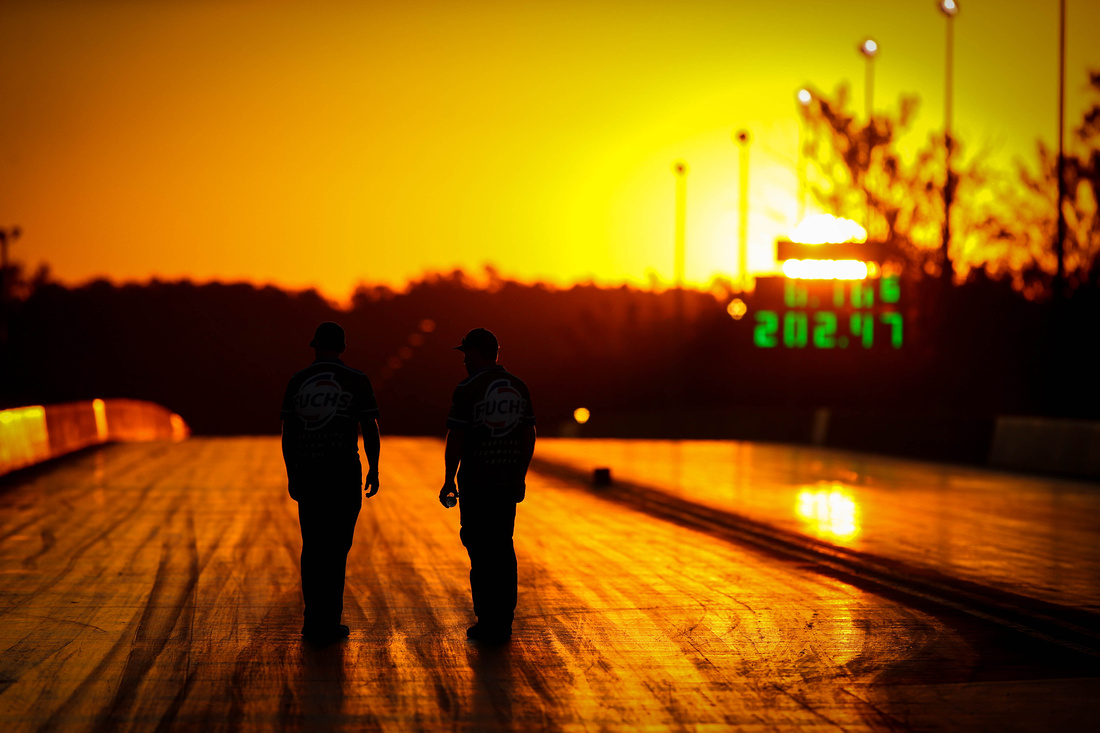 The Gulf Western Oil Winternationals is a world-class event, where over 500 race teams gather across four days in front of over 30,000 spectators to take part in the largest drag racing festival in the Southern Hemisphere.

The logistics behind producing an event of that scale are complex and would be next to impossible to manage without the valued contributions of some 140 volunteers who will be looking after everything from directing spectators in the car park to activating the green light for a pair of 500kmh Top Fuel dragsters.

Some volunteers have been with Willowbank Raceway since it opened, others will be new for the event. But in total they will all contribute around 1700 hours of effort into making the Gulf Western Oil Winternationals the greatest drag racing event in Australia.

The Gold Coast's Dale Wong volunteers in the high pressure area between the staging lanes and the track, where pairings of vehicles are formed and the 'fire up' signal is given. Timing and communication between race control and track safety officials are vital with Wong giving the command for vehicles with up to 10,000 horsepower to come to life.

“Volunteering at the Gulf Western Oil Winternationals gives you the greatest feeling of euphoria just from knowing that you have played a part in one of the greatest motorsport events in the country,” Wong said.

“I enjoy the challenge of being able to keep the event moving forward, particularly when things start to go in different directions and you might have delays.

“During the running of the event it can be hard to gauge how the public and racers are finding it but when you speak to these people and they praise how awesome the Gulf Western Oil Winternationals are or were, the sense of pride is almost overpowering.”

One of Wong's favourite moments is the Officials' Parade, which takes place on Sunday morning before the opening ceremonies.

“When the crowd is cheering the whole team of volunteers it gives you the biggest feeling of achievement,” he said.

While Wong's role will be virtually invisible when performed smoothly, Yamanto's Mark Allan will be heard by almost everyone attending the Gulf Western Oil Winternationals as one of the commentary team.

Allan splits his time between racing and commentary, enabling him to give back to the event while still enjoying it on the track.

“I’m very fortunate to have the role that I have,” he said. “I get to call the racing from the best seat in the house. I’m invested in every race that I announce. I feel the jubilation of a record breaking run to the heartbreak of a team not qualifying in that final session. I like to think that way of calling a race engages the spectator to have some of their own personal emotional investment into each run from the stands as well.

“The Gulf Western Oil Winternationals is the pinnacle of the sport and to contribute that tiny bit towards such a large event is rewarding.”

Mark is not the only member of the Allan family to be involved, with cousin Kristie greeting racers at the front gate. As a former racer herself, the role allowed Kristie to keep meeting more teams. “When I finished racing Junior Dragsters in 2010 I was a little lost on what I could do,” she said. “I had always spent a lot of time with the officials at the track and always loved giving them a hand. So when I was asked if I could volunteer on the front gate I was a tad excited!

“At the time I was only 17 and I thought it was an opportunity to learn new things; it was a totally different approach to customer service than what I was used to.”
The position is unique, with Allan getting to see racers with all their pre-event excitement and nerves.

“I always find the Gulf Western Oils Winternationals an exciting time of year. For me personally I think it has this amazing feeling, the atmosphere is just something you can’t explain. Everyone is so upbeat and ready to kick butt.

“Coming from a racing background I love seeing the racers and the crew, having a chat and a joke with them all. It’s also great to see the spectators coming in and having a chat to them, so many of them travel from overseas.”

The Gulf Western Oil Winternationals run from June 7 to 10 at Willowbank Raceway. For more information head to www.willowbankraceway.com.au.

Prince Mraz(non-registered)
Consider what things according to an overall perspective draw in you and what you love to do ought to be according to a general viewpoint thought to be going before picking any accessibility program. You can visit http://www.correctmysentence.com/change-my-sentence-around/ for useful ideas. think about what kind of calling course you plan on after and what your full scale work fights are.
Brock00(non-registered)
Religion is the significant concern that keeps us joined. One hire this http://www.paragraphchecker.com/english-sentence-correction-online/ to do work at time. Regardless, there are not everything considered any real troubling individuals who are paying novel frontal cortex to the trick and crude side of religion.
Lyric94(non-registered)
EMP's SoundOff was astoundingly fulfilling for me. I even took photos of the lead entertainers of this show. I illustrated on this yet I had different maltreatments in my making limits. Click http://www.paragraphcorrector.com/how-to-check-compound-sentences-with-free-online-paragraph-editor/ this will help you a lot. It's anything but's a truly sensational night for me.
Rohan28(non-registered)
There are different sources and references open online for self-train planning. Click http://www.commacheckeronline.com/take-advantage-of-comma-corrector-read-these-10-tips/ to read a useful info. There are different enlightening books, works out, visual collaborators, and mechanized books offered at the tip of your fingers through the web.
Rohan28(non-registered)
The comfort which we are looking in the outside and mortal world should be made through administering suggesting works out. Just have a look https://www.punctuationcorrector.com/auto-correct-punctuation-vs-checking-the-paper-manually/ i hope you will like it. This human world can't give us anything.
No comments posted.
Loading...
Subscribe
RSS
Recent Posts
Caruso Family Racing Are Headed To The World Series Of Pro Mod! AUS RECORD HOLDER TO DEBUT NEW CAR AT JAMBOREE SADEK STEPS UP IN THE GODFATHER’S CHARIOT WINTERNATS WIN FOR TEAM BRAY RACING RAPISARDA AUTOSPORT INTERNATIONAL PART OF HISTORY First female Top Fuel champion crowned at Winternationals for LTFR TBR READY FOR WINTER WONDER Volunteer manpower behind the horsepower GOUWS FAMILY LOOKS TO MAKE IT 2 FROM 2. Rod’s racing turbo charged by power duo sponsorship
Keywords
andra willowbank sydney doorslammer winternationals top top fuel perth fuel racing
Archive
January February March April May June July August September October November December
© 2018 Dragphotos.com.au - All Images remain property of Dragphotos.com.au
Powered by ZENFOLIO User Agreement
Cancel
Continue