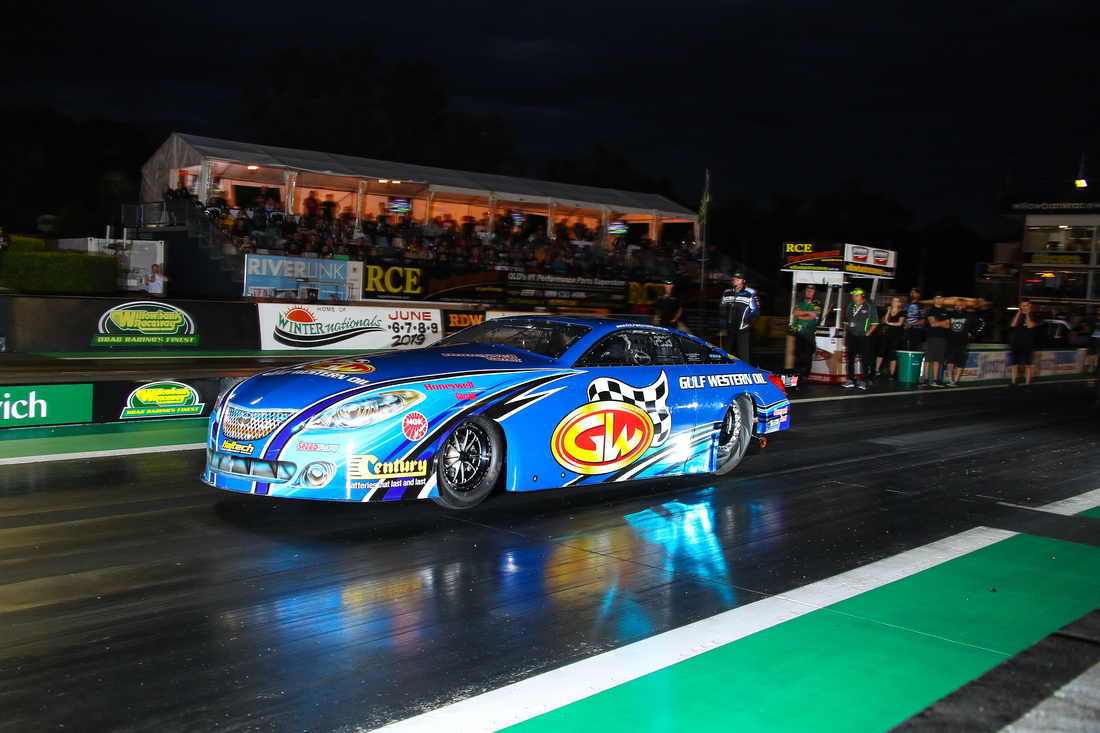 Ben Bray has taken the Factory Xtreme victory at the Gulf Western Oil 51st Winternationals at Willowbank Raceway this weekend while his father and drag racing legend Victor Bray made a very popular comeback.

TBR principal Victor made his return to Pro Slammer racing this weekend after a 13 month absence following a courageous battle against an aggressive form of skin cancer.

The six-time national champion joined with his son Ben and TBR team-mate Frankie Taylor to mount a three-strong attack on the Pro Slammer competition at this weekend’s event, and while a record bump-stop (5.804s) saw only Ben (5.777s) make it through to race day, the smiles could not be wiped off the faces of all at the Gulf Western Oil-supported team following Victor’s triumphant return.

The capacity crowd were just as happy, welcoming Victor’s first foray on-track – which included a three-quarter track burnout in the second qualifier – with a foot-stamping standing ovation.

“That moment was really good,” Victor said. “I was a bit nervous on Friday, I felt much better on Saturday. I love the fans and I really enjoyed being back signing autographs and chatting to everyone – I really didn’t want anyone to miss out!

“Then while working on the car to get it ready, I was feeling a bit crook. I felt really comfortable though when it was time to get in the car – it didn’t bother me that we didn’t make it out for the earlier session, when I finally got in the car, strapped my belts and settled in, I felt right at home again. It is just what we do as racers.

“A big thanks has to go to Ben for working lots of late nights to get my car ready, and to David ‘Sully’ Sullivan, our crew chief of 20 years. A big thanks to the fans too for all of their unwavering support, they sure made a lot of noise for me and it was really greatly appreciated.”

From the sidelines on Sunday, Victor and the rest of Gulf Western Oil TBR watched on as Ben took on eventual semi-final winner Paul Mouhayet in the first round of Pro Slammer, before taking on Rod Harvey for the win in the first round of the Factory Xtreme eliminations. He would then impress in the semi-final with a new personal best of 6.639s at 209.39mph to see his Gulf Western Oil Toyota Solara now the quickest 1FZ powered car in the country. From there, the Factory Xtreme final called with the three-time national champion taking on and defeating Gina Bullians for the event victory in cold conditions, despite a very slippery top end.

“What a weekend – to take the victory in Factory Xtreme is brilliant but how good is it to see dad back where he belongs, in the seat of his Gulf Western Oil Pro Slammer,” grinned Ben.

“A Gulf Western Oil Winternationals win, a new PB and Australian record, and dad back in black: this is a weekend all at TBR will remember for a long time!

“We also saw Kelly Bettes win her Top Fuel semi-final and take out the Top Fuel championship, making her the first female ever to win a professional drag racing category in Australia and only the third female in the world to win a Top Fuel championship. Our congratulations go to Kelly on her massive achievement this weekend.

“And I have to mention the crowd – what a crowd we had this weekend! The place was bursting, we were overwhelmed all weekend with well-wishers, and there just aren’t words to properly describe the noise and the atmosphere after dad’s burnout on that first pass. They sure were happy to see him back and made no secret of it!”

Team Bray Racing will next be on-track for the upcoming Nitro Up North event, to be held at Hidden Valley Drag Strip across July 13-14, the first round of the 2018/2019 400 Thunder Championship.

To keep up to date with all of the latest news from TBR, visit www.teambrayracing.com, follow the team on Facebook at www.facebook.com/teambrayracing, or interact with them on instagram (#teambrayracing).

tutoring near me(non-registered)
[url](google.com)
tutoring near me(non-registered)
<a href="google.com">google</a>
tutoring near me(non-registered)
Do you think tutoring is still relevant today, or is there a generation that thinks what you learn in school is useless? After all, it is not knowledge that is taught in school, but the ability to think. The same mathematics develops critical thinking and logic; yes, the system is not perfect, but again it is necessary.
Ja(non-registered)
<a href="#">g</a>
Romarion(non-registered)
https://www.google.com/
No comments posted.
Loading...
Subscribe
RSS
Recent Posts
Caruso Family Racing Are Headed To The World Series Of Pro Mod! AUS RECORD HOLDER TO DEBUT NEW CAR AT JAMBOREE SADEK STEPS UP IN THE GODFATHER’S CHARIOT WINTERNATS WIN FOR TEAM BRAY RACING RAPISARDA AUTOSPORT INTERNATIONAL PART OF HISTORY First female Top Fuel champion crowned at Winternationals for LTFR TBR READY FOR WINTER WONDER Volunteer manpower behind the horsepower GOUWS FAMILY LOOKS TO MAKE IT 2 FROM 2. Rod’s racing turbo charged by power duo sponsorship
Keywords
andra willowbank sydney doorslammer winternationals top top fuel perth fuel racing
Archive
January February March April May June July August September October November December
© 2018 Dragphotos.com.au - All Images remain property of Dragphotos.com.au
Powered by ZENFOLIO User Agreement
Cancel
Continue