SADEK STEPS UP IN THE GODFATHER’S CHARIOT

SADEK STEPS UP IN THE GODFATHER’S CHARIOT 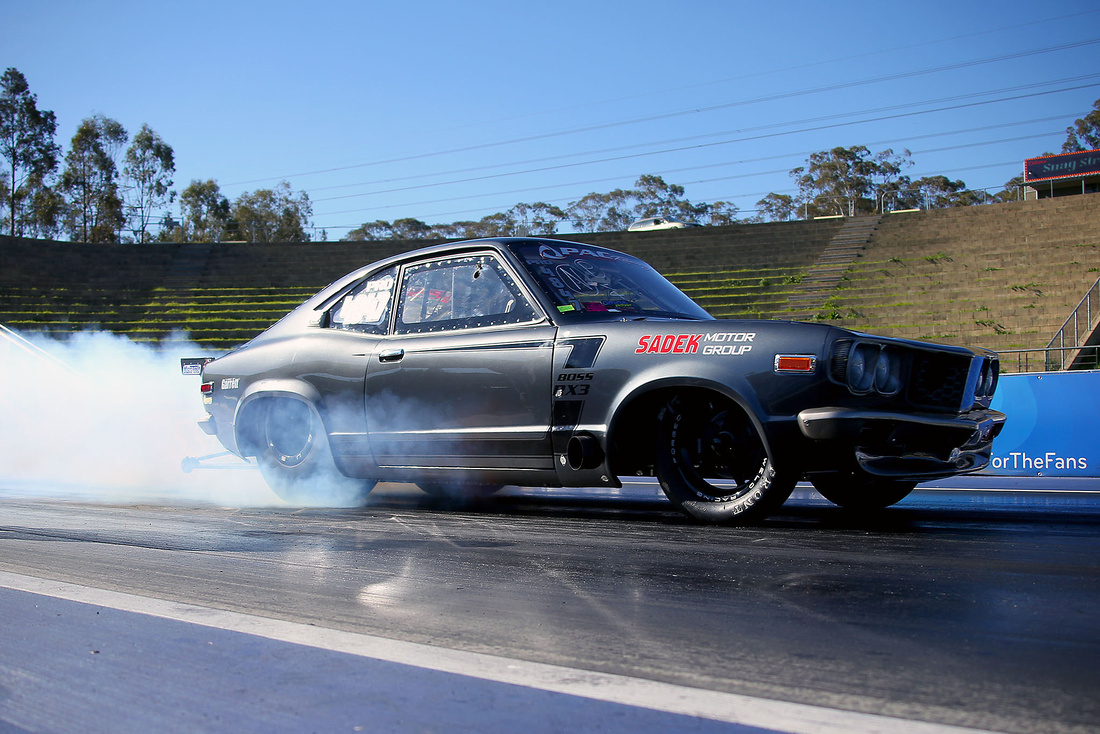 After eclipsing the previous ‘PB’ of the 20B-powered Sadek Motor Group BOSS RX3 Coupe of his dad, Sam ‘The Godfather’ Sadek, 20-year-old Jay Sadek is getting ready to race the car for the first time at the upcoming Honeywell Garrett Brisbane Jamboree presented by Link ECU and Tuners Edge.

In his first-ever full-track pass in his dad’s car, Sadek Junior set a 6.938s pass at 310km (193 mph) – besting his dad’s personal best in the car of 7.03 seconds at 312kph (194mph). It is believed that by setting this pass, Jay is quite possibly the youngest ever in the world to run a ‘six second’ quarter-mile ET in a rotary-powered car.

With testing now complete, the Camden-based racer is getting ready to step up to the Pro Turbo category of what is Australia’s premier sport compact drag racing and car culture event, being held at Willowbank Raceway across August 25-26.

“It was really different stepping into dad’s car for the first time – it is so different to what I used to race, you are on the other side of the car, it has a bigger engine, everything happens a lot quicker, you have to really be on-point,” Jay explained.

“It was really exciting as well – I wasn’t really feeling any pressure, I more just wanted to really push myself to beat his time. I didn’t expect to do it on my first full pass though!

“I was pretty thrilled when I got out of the car – I didn’t believe it until I saw the actual printed time card, I thought everyone was lying to me when they told me I had run a ‘six’.”

When the son eclipses the father, some would assume the father might feel put-out. But that is far from the case when it comes to the Sadeks, a very well-respected racing family in Australia’s sport compact scene. 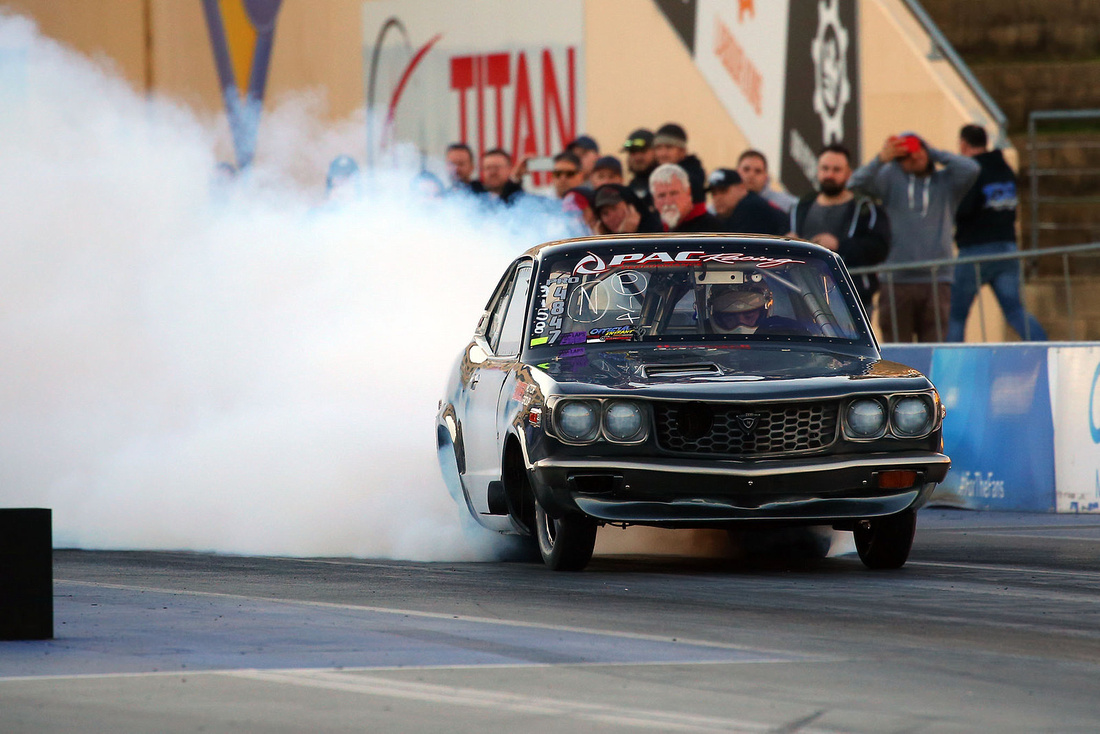 “When I saw the numbers come up on the timing boards it was just a feeling of ‘wow’. I was watching him closely making sure he was slowing down and that the parachutes opened, and once they did, what he had done hit me like a tonne of bricks – all I could think was that I don’t know of any 20-year-old that has ever run a time like that in a rotary,” Sam explained.

With the first test completed so successfully, the competitive debut for Jay in this car is hotly anticipated. However, Jay says he and the Pac Performance team won’t be looking to ‘rotate the earth’ straight out of the gate.

“We won’t be in a rush for world records at this stage, we will just be taking things one step at a time,” Jay explained.

“Bit by bit we will add boost. We are on base power at the moment, but as I get more comfortable in the car we will add more boost and go from there.

“We will be happy if the car is reliable on the day. Aside from that we don’t have any expectations – to be honest I go to Jamboree to enjoy myself. If you go there thinking like a winner, if you lose you come home disappointed, that is how I think of it anyway.”

While he might not be eyeing off an event victory, Jay certainly has winning form under the Jamboree format.

“In 2017 I won in the modified compact class at both the Sydney Jamboree and the Brisbane Jamboree, where I also took out the Best Wheelie Award! We were certainly happy with those results,” Jay said.

“We will be stepping up to the Pro Turbo class this year which is exciting. As a kid I watched these bigger classes and always dreamed of racing in them. I am really looking forward to racing the bigger cars and pushing myself to see how good of a driver I am against the rest of the Pro Turbo guys.

“No matter what happens, it should be a great event. I have to say a big thank you to Pac Performance and the crew for building a beast of a car and for always supporting me – I have known them since I was born and they are not just my mechanics, they always have my back.

“I have to say the biggest thank you to my dad for giving me the opportunities I have had – not many kids my age get to do what I do and I am very thankful for all he has done for me.”

The Honeywell Garrett Brisbane Jamboree presented by Link ECU and Tuners Edge is Australia’s premier sport compact drag racing and car culture event. It will hit Willowbank Raceway across August 25-26 with hundreds of incredible vehicles on display and competing for the most coveted award in sport compact drag racing, the fabled ‘Billet J’ trophy. Across both days there will be action aplenty both on and off the track, with not only plenty of intense racing taking place across the quarter-mile but also plenty to see and do around the venue including a Shannons Show-N-Shine, Sound Off, Dyno and Drift Exhibitions, Babe and Bikini Comps, Trader Stalls, Kids’ rides and lots more.

Lyric94(non-registered)
I'm very amped up for your idea of making a story where you would show the fights and issues of neighborhood performers. Visit http://www.sentencestructure.org/grammar-for-sentence-patterns-in-english/ for more ideas. I genuinely love your idea.
Wava58(non-registered)
Direct from the most trustworthy beginning stage season of music making courses of action for youngsters, the guardians should give close idea. One hire this http://www.correctmysentence.com/why-you-cant-fix-the-sentence-online-without-reading-this/ to do work at time. They ought to see what's in store from the music school for their youngster. In particular, they should make controls pick the best instructor.
Rohan28(non-registered)
Social work can be depicted by substitute viewpoints, yet is if all else fails picked the bettering of society. I often visit http://www.commacheckeronline.com/9-biggest-comma-and-punctuation-checker-mistakes-you-can-easily-avoid/ to make my work correct one of the world's most praiseworthy purposes behind living can take on an enormous number plans.
Rohan28(non-registered)
It is so bewildering for me to see that Danish Admin Waghlon has left this party. Just have a look http://www.englishgrammarcheck.org/english-grammar-check-for-professional-writing/ i hope you will like it. It is beginning starting late second for me why he left this conversation stage.
Brock00(non-registered)
Ashampoo is the mechanical party for such people who love to download stunning motion pictures in the decreased size. Click http://www.passivevoicecorrector.com/make-your-essay-perfect-with-passive-sentence-checker/ to read a useful info. I'm downloading different sorts of movies for the most part through this arrangement.
No comments posted.
Loading...
Subscribe
RSS
Recent Posts
Caruso Family Racing Are Headed To The World Series Of Pro Mod! AUS RECORD HOLDER TO DEBUT NEW CAR AT JAMBOREE SADEK STEPS UP IN THE GODFATHER’S CHARIOT WINTERNATS WIN FOR TEAM BRAY RACING RAPISARDA AUTOSPORT INTERNATIONAL PART OF HISTORY First female Top Fuel champion crowned at Winternationals for LTFR TBR READY FOR WINTER WONDER Volunteer manpower behind the horsepower GOUWS FAMILY LOOKS TO MAKE IT 2 FROM 2. Rod’s racing turbo charged by power duo sponsorship
Keywords
andra willowbank sydney doorslammer winternationals top top fuel perth fuel racing
Archive
January February March April May June July August September October November December
© 2018 Dragphotos.com.au - All Images remain property of Dragphotos.com.au
Powered by ZENFOLIO User Agreement
Cancel
Continue